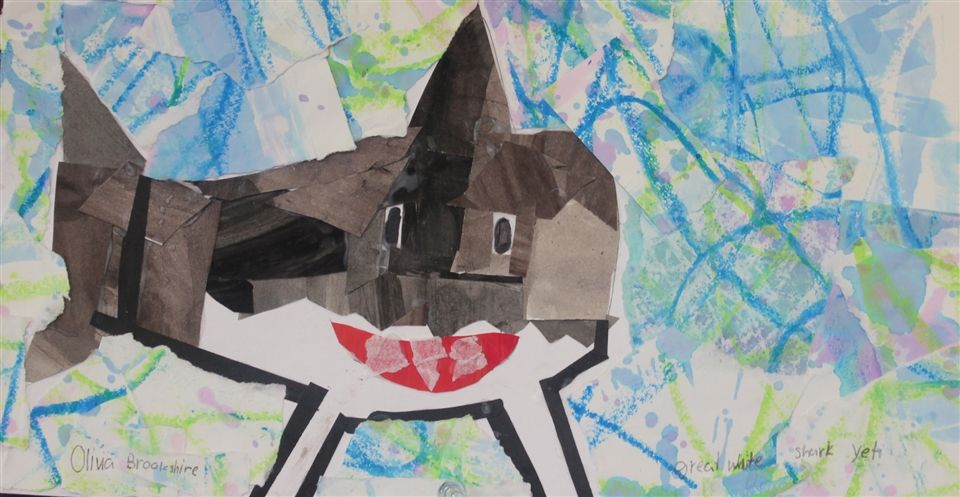 1/23/2019
The magnificent and colorful works of shark art lining the hallways of Grade 3 (a project led by art teacher Kara Angeloni-Williams) gives only a brief, but artistic, glimpse into all that transpired in a two-month unit of study on sharks.
This collaboration involving homeroom teachers and specialists in the areas of science, library, language, and technology showcases the power of transliteracy unfolding in our classrooms at Nashoba Brooks School.
Science teacher Kelly Western began the unit by giving students the ability to track sharks that were individually assigned to them with an attached beacon. Our budding marine biologists used an online resource called Ocearch on their Chromebooks to chart their movements to learn more about their surfacing patterns, how far out into the ocean they travel, as well as potential migratory patterns. Students learned that sharks are a keystone species: if they are stressed or are dying, it is a signal that our oceans are not healthy.
This integrated unit extended into the library through literature. Students read two books about sharks: The Three Little Hawaiian Pigs and the Magic Shark and Sea Creatures from the Sky. The students compared and contrasted how sharks were portrayed, especially timely when considering the swirl of attention around these creatures due to increased sightings and recent encounters with humans on Cape Cod.
Students also watched part of a documentary series on sharks by Madison Stewart called Shark Girl. They learned about a girl on a mission to protect our sharks, a battle that began when she “put her studies on hold, grabbed a camera, and set out to save these incredible, misunderstood creatures.”
Using Skype technology, students also had the opportunity to interview Madison Stewart, asking questions they had prepared in advance with the help of their teachers. Director of Educational Technology and Innovation Hank Bryant taught our Grade 3 researchers how to use Google slides to present their findings about their specific type of shark. With Spanish teacher Amy Riddle, students found their shark names in Spanish with PebbleGo Spanish, and some students found developed a slide in Spanish about their shark, translating their learning into another language.
For the culmination of this unit of study, students will embark on the next leg of their journey: a trip to the New England Aquarium to see these wonderful creatures up close and personal, bringing with them all they learned through multiple platforms.
Back