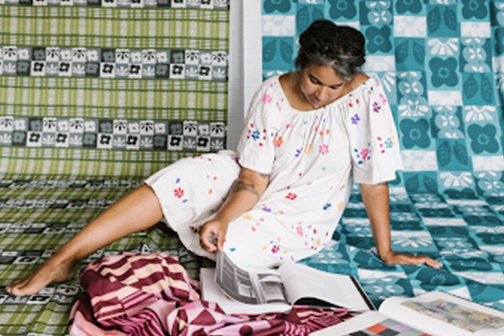 1/26/2022
Rachel Adams graduated from Nashoba Brooks School in 2001. She went on to study at Lawrence Academy followed by Maine College of Art and Design. Now living in Portland as a successful artist, textile designer, entrepreneur, wife and mother of two, Rachel shares her journey from student to full time artist.
Rachel recalls her experiences studying art at Nashoba Brooks under teachers Ms. Lawson and Ms. Stanley–both of whom she had hometown connections with. For Rachel, “The art studio quickly became a touchstone to home” where she vividly remembers creating magazine mosaics and a plaster mask of spaghetti–featuring her own face as the sauce. Rachel explains that she “always loved being in the art room. It was a safe haven. I felt like a competent, confident student; when, at times in other classes, it was difficult to find my voice, the art room was my place to shine.”
After graduating from Nashoba Brooks, Rachel attended Lawrence Academy with a handful of her classmates. When it came time to pursue her next step, however, Rachel struggled. She saw her peers following wonderful educational paths that she, herself, was not interested in. She knew she loved creating art, but was not sure if pursuing it through an art school would be the right choice for her. One day her art teacher mom picked her up from school and sat her down in her art studio with all types of medium laid out before her. Rachel was given one task: ‘don’t get up until you’ve made something.’ Rachel remained focused on the creation in front of her until it was complete. It was the first time she had been given a non-school art assignment and the first time she had a creative high from making and diving in without thinking. From this experience, Rachel gained the confidence to explore art fully and look into how she could further her education in the field.
Rachel went on to attend Maine College of Art and Design. After college, Rachel followed the path of many art school graduates by working in the service industry. Eventually, she moved back home to Harvard, MA where she engaged in an opportunity to work with the town to transform an old library into a cultural arts center for all ages. There, Rachel curated art shows that featured works by seventh grade amateurs and some of Boston’s most established artists. She also created after school programs for elementary and middle school students, and hosted community led cooking classes and yoga practices, “every person I met, I tried to see what they wanted to share with their community.”
Rachel eventually made the move back to Portland and worked with a company called DesignTex, where she was a member of the design team and project manager before ultimately deciding that it was time to make her own artwork her full time job. After years of making art on the side, Rachel and her husband, Ryan Adams, both took steps towards making art their careers. When the COVID-19 pandemic hit, it launched Rachel into pursuing her art career faster than planned. Rachel describes this time as a “cultural awakening…where all of a sudden black creatives are being seen in worlds where they had been overlooked.” For both Rachel and Ryan, this awakening catapulted them full force into the art world.
Rachel and Ryan are being featured in magazines, doing modeling jobs, and exploring opportunities they did not know existed. This boom helped them realize that while they thought they were not getting opportunities because their artwork was not good enough, in fact, “we were not seen because we didn’t have a seat at the table.” Rachel was able to launch her company, TACHEE, a textile design company that offers small batch printed goods, design collaborations, and more. The company, originally inspired by Rachel’s desire to have gender-neutral clothing for her two daughters, quickly became a place for much more. When asked about the decision to name the brand TACHEE, Rachel explains that it was the way she used to say her own name as a young child. For her, the name alludes to her childish side and her childhood dream of creating art. For now, Rachel hopes to grow her brand, collaborate with other talented artists, and eventually become a household name.
Rachel shared some advice for current Nashoba Brooks School students. The advice resonates with community members of all ages:
For young artists hoping to find their future career in the field, Rachel has this to say: “We’re literally at all times surrounded by art. Figure out what it is you like to do and see how it can be applied to different things.”
You can find Rachel’s work on her website and instagram and visit her mural installations in various locations around Massachusetts and Maine.