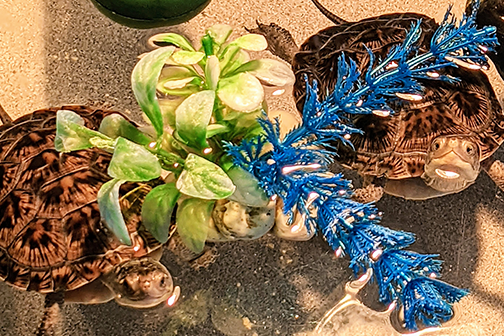 2/2/2022
As part of a multi-school initiative to support endangered species, Grade 7 students foster two Blanding's turtles for the school year.
Two small turtles have entered the hearts and minds of the seventh grade class at Nashoba Brooks School. While they go by many names, depending on which Grade 7 student is asked, the generally agreed upon nominations are Bubbles and Squirt. These Blanding's Turtles are two members of a species that is one of the most threatened in the northeastern United States. According to Zoo New England, it's possible that fewer than 3,000 individuals of this relatively large and gentle freshwater turtle species remain. Because of habitat loss and roads, many of the young turtles do not make it into adulthood, which hinders propagation of the species.
But here, nestled under a heat lamp in the back of Ms. Lewis's science classroom, two Blanding's turtles are nurtured as part of a program that aims to repopulate this unique, native species. "The program is run by Zoo New England's Field Conservation Department," Ms. Lewis explains, "and our students are a crucial part of making sure the juvenile turtles survive." Nashoba Brooks students will take care of two out of 100 turtles being cared for by students throughout New England. For eight months of the year, nurtured in safe environments, these tiny turtles grow strong and eventually reach a size that makes them less likely to be food for predators. "The turtles survival rate increases by 30 times, once they are released back into the wild," Grade 7 student Emily C. explains while carefully weighing Bubbles, one of the many daily tasks students complete.
All members of Grade 7 have taken a turn caring for and recording the turtles' progress. Using a form that is shared with conservationists at Zoo New England, they continue to monitor progress, keeping the turtles on track for their eventual return to nature.
"I love turtles," says Ellie E., who volunteered to take Bubbles and Squirt home during a School holiday, "and I'm so glad that we get to take part in making sure they survive."
Back